These photos are courtesy of Cec Marshall, and were taken at the club’s yearly display at the Sault Ste. Marie Sportsman Show – way back in 1978!

Nowadays, the club has annual displays at the Civic Centre and Station Mall in springtime and at the Bushplane Centre in the fall.

Regarding the Spitfire Mk IX and the RC helicopter (very rare at the time), Dr. Nino Campana reports:

The Spitfire I built with a lot of attention to detail. It was the Spit flown by a British ace with a pencil thin moustache, Robert Stanford Tuck. But his id letters were RST . Hmmm. Anyway it was flying nicely on its first flight when the cowl lifted off behind the prop causing some consternation as it slammed back into the canopy. It reached the ground (covered with 6’ tall canary grass) faster than my reflexes but without further damage. We found the cowl but not the canopy. Wayne Quirt said he had a Spit Canopy that would fit. He took it back to North Bay, replaced the canopy, loved the plane and bought it from me.

The chopper was a handful to fly, due to lack of pilots’ skills. One serious error was forgetting to unwind the receiver antenna from the rear rotor boom. Needed new rotors top and rear.

Most astounding was when my son and I left it idling beside the transmitter while we returned to the car to get something. When we turned to return to the heli, it had lifted off, levelled off at five feet and flew off toward the Black Road, where it reversed and returned to point of take off. When 20 feet away from us, the .20 engine quit, and the heli just dropped four feet on its inflated plastic floats, unharmed. We turned off transmitter and receiver, packed up and went home, as puzzled as I remain to this day. There’s no doubt, designer of the craft engineered an inherently stable a/c.

Enjoy this blast from the past – and a rare insight of what club members were building almost four decades ago!

Click to enlarge and read the captions (photos by Cec Marshall) 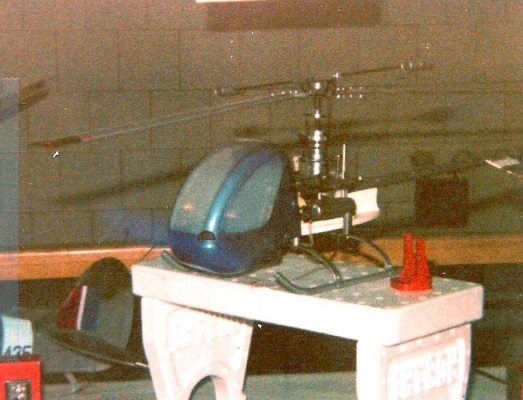 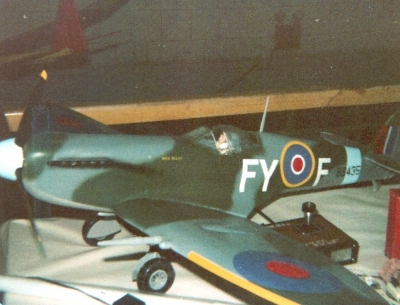 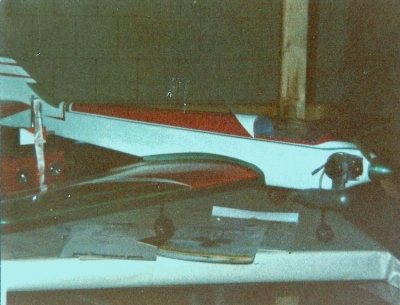 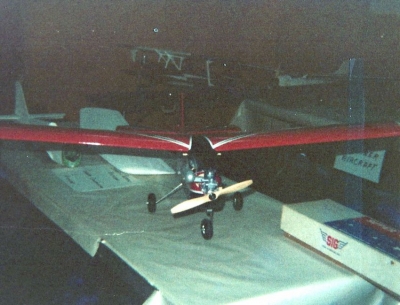 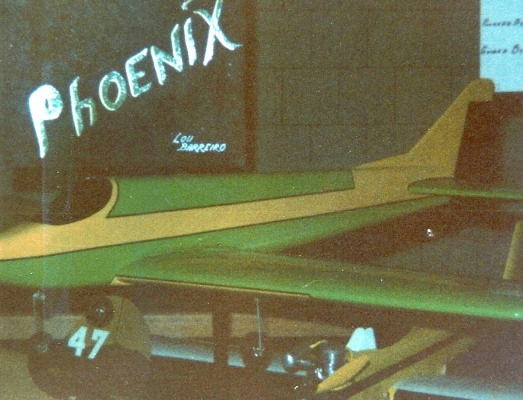 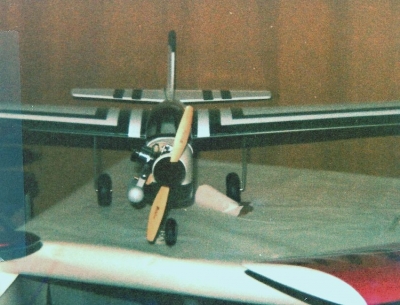 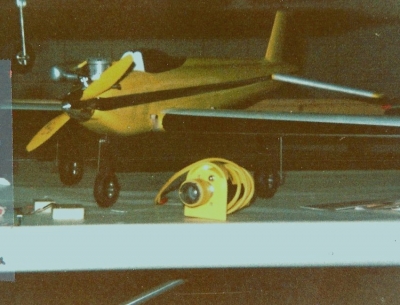 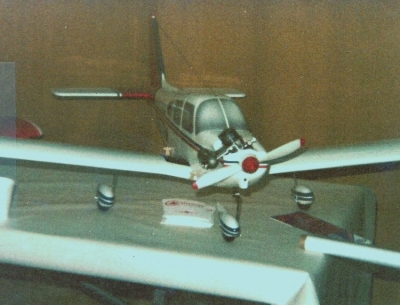 How Capt. Beauregard got a new name and other short stories – 1979

Wally Batter (with tx) was adept at flying Cox powered small gliders. I remember launching one of those with Paul Butcher (right) on the controls. Paul shouted at me to turn in the needle valve, commonly done from the rear of the engine. Somehow I managed to entangle my hand with the nylon prop tips as I reached over the engine from the front. Suddenly 21 shallow red lines appeared on the thenar eminence of my right pollex, also known as the fleshy part of the thumb. It did not stop the Cox so I launched and licked my 21 wounds. Salty. When the plane had landed Paul looked at my paw, and from the even spacing of the shallow slits estimated that the prop had been turning 10,850 rpm. Paul always had a keen eye in his youth.

This photo (left), and the next two photos below show Paul’s nine foot Taylorcraft he got from a guy in Blind River who bought and hoarded kits. Pre- and postwar ads appeared for a model company in US model mags for four 9‘ span kits, possibly Aristocraft. These kits were all balsa for Forster .99s or larger engines. The guy was offering everything for sale at less than half price. Someone told me about this and I told the guys at the field early on a weekend morning. An American Air Force Captain was at the field. He was stationed at Kincheloe AFB, married to a female  AF medic, just back from Germany with a Rolls Royce engine in a Daimler-Benz which he had at the field. I don’t remember his last name, but his first name was Beauregard.

Paul was instantly interested and started packing his gear into his station wagon to unload at home, and asked me to go with him to Blind River. Lunch was waiting for me at home, so I declined. Beauregard asked how far to Blind River, and being a friendly Canadian, I told him. He got into his wife’s car and purred off down HWY 17E. When Paul got to Blind River, the Yank had bought absolutely everything he could fit in the car, paid for in American cash. Paul managed to cadge the Taylorcraft kit from him for more than he’d paid for it. Paul was in a rage all the way home, partly directed to his friendly Canadian fellow modeller. Paul renamed the Yank Beauschitt.

Paul built the plane, and looked for an engine. He found a two-stroker displacing about 1.2 c.i. It was almost adequate. I can’t recall the engine’s make. Anyway Paul had to increase the tailplane incidence about 2 degrees to have it fly hands off. He did this with all his scale models, including the Cleveland kit of the Stinson Reliant (all built-up ribs) which I had bought and built, but had not yet covered. I had increased the incidence of the stab based on Paul’s dictum, but forgot to tell Paul. He raised it to 4 degrees. On the taxi test, the Reliant couldn’t get its nose up to take off. We eventually solved the issue and Paul so enjoyed its flying qualities he built a 12’ version he flew until its final crash. I don’t recall the fate of the Taylorcraft.

The last photo is my totally scale model BE-2e. The instruments are hand turned brass, with appropriate markings, all flying surfaces have hand stitched covering over the ribs, with extra close stitches in surfaces that came within the slip stream of the large laminated  four bladed prop. The fuselage covering had grommets at the edges of the covering and, as in the real plane the grommeted surfaces were laced together. On the real planes this permitted the ground crew to unlace and re-lace the covering after combat damage had been repaired.

The engine was obtained from OS for me by Bud Nosen when their first 4 stroke .60s were imported. Ugh! It  had almost  the power of a .40 2 stroke. So it dragged the bipe into the wind and because the undercambered stitched ribs covered a large area of flying surface it waddled slowly into the air. The control surfaces were huge so it responded nicely to command. I circled the field four times and almost clipped a post coming in from a maximum height of 30 or 40 feet. I tried other 4 strokers but the plane flew as sluggishly as the real plane did. “Naturally,” Paul said, with all those interplane struts, rigging wires, and camera you have a built-in headwind!”

It took two years to build; it’s been hanging in my garage for 36 more years.

The first three photos (below) are of Paul’s six foot span Fairchild Cornell as it was known in the RCAF, and as the Ranger in the USAAF. It was used as a primary trainer so it was designated the PT-19. Paul may have a built five PT-19s. The smallest spanned about three feet. The two of us went flying the small one one gray winter afternoon. I hand launched it. He flew it a while, then slowed it down and caught the wing tip with his gloved hand, turned 180 degrees and released it; he did this time and again, catch and release. When the Super Tigre .15 started to sputter he caught it again and the engine stopped. It was getting dark after two more flights so we returned to our respective homes.

Click on the photos below to enlarge and read the captions. These photos were taken at our flying site at “Strathclair” (corner 2nd line & Black Rd)

This article was originally published in the SOO MODULATOR – December, 1979

We started the year with a wine and cheese party at my residence. By the size of the crowd in my rec. room, shop, living room, and dining room…  it is safe to say the event was a success. The wine flowed, the cheese consumed, and everyone had a great time. Having the party in the dead of winter sure helped cure the winter blues.

We held our annual Frozen Finger Fun Fly in late February. We had the parking lot at the field cleared of snow and held the event at the field. This was one of the reasons that attendance was so high. In my opinion, most of the members felt safer flying at the field rather than at Bellevue Park. There were ten members entered in all.

May 26th and 27th saw one of the biggest Pattern and Stand Off Scale meets to be held locally. Close to 40 aircraft were entered in the various classes. It was one of the first contests that turned a profit worth mentioning. Our own flyers are becoming more and more competitive. Competitors came from Thunder Bay, Wawa, Sudbury, Michigan, and Wisconsin.

On the long weekend in August we had a picnic/BBQ over at Brimley. I don’t know how it turned out as I had other commitments. I heard that everyone there had a good time though.

Later in the month, we had a summer fun fly. This was attended by about 12 competitors. It was an exciting event with some very tense moments. With the support of the local hobby shop (Leisure World), there were prizes for everyone. The prizes included a gallon of fuel, some props, a set of retracts, and lots of assorted parts. The prizes were handed out by drawing names out of a hat. It was ironic that Gary Verdonne, who placed last, got first choice of the prizes. I still don’t know why everyone hid under the picnic table when I was flying though!

The club contest held in late September was the most well attended, hotly contested event I have ever seen with the club! The scale entries were beautiful, and the competition for the trophy was very keen. I for one, was glad to see these planes out and actively competing.

We tried something new in Pattern to make the competition more fun. We had everyone fly manoeuvres from their class, but eliminated the scoring on certain manoeuvres to keep the same number of scoreable manoeuvres the same (10). This way, even though one was flying novice, one competed against everyone. It worked out very well, those with experience came to the fore.

We tried to have another Fun Fly in October, but it was snowed out.

I would like to hear from the membership about what they expect for the coming season. Some have already expressed an interest in having several club level Pattern contests, others would like to try a Scale Meet ala Kitchener-Waterloo. If enough interest is generated, any type of meet can be held. 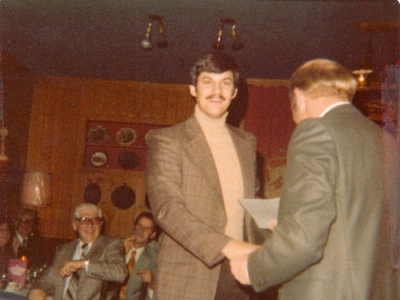 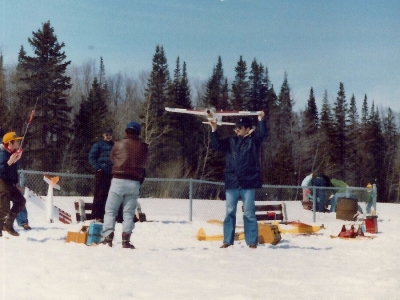 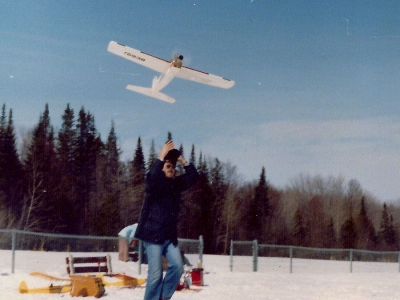 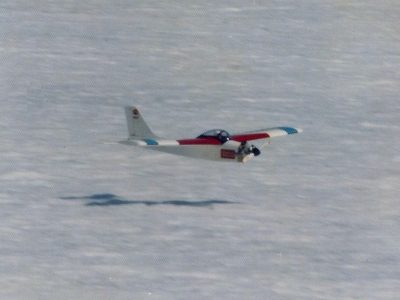 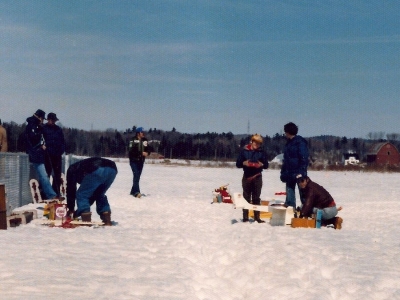 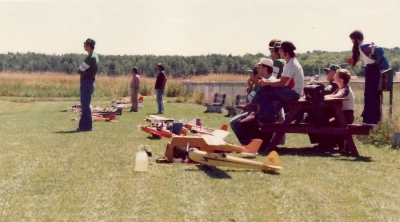 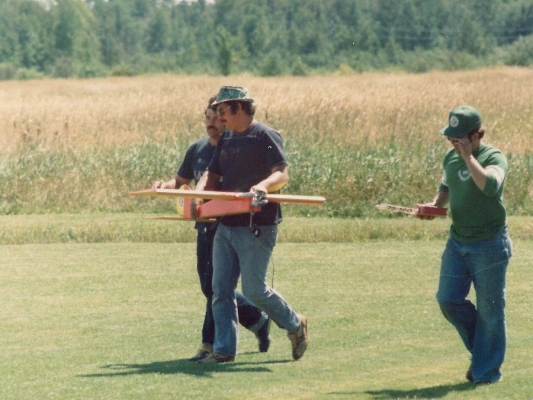 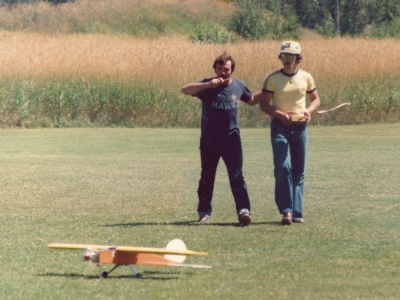 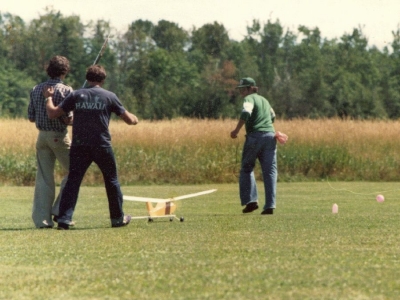 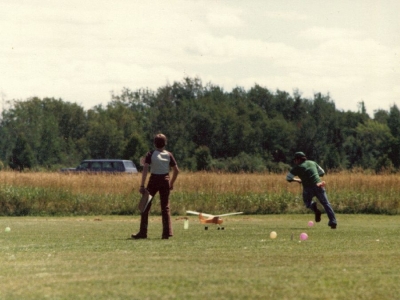 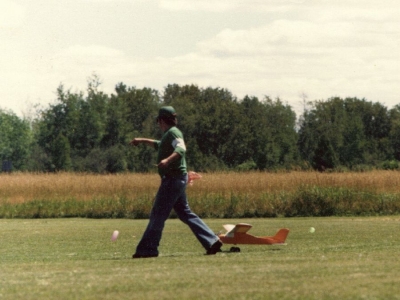 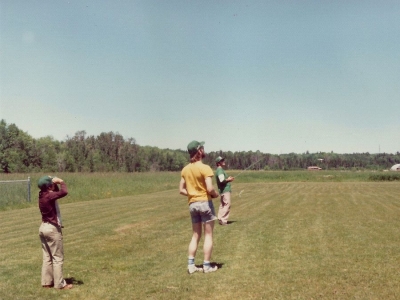 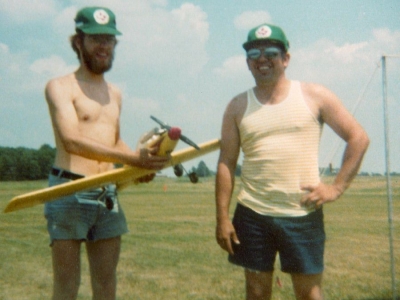 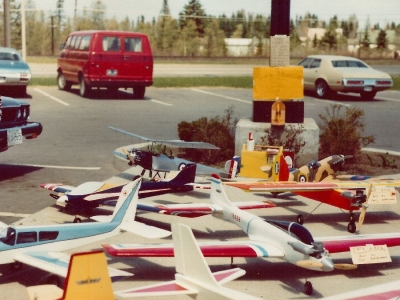 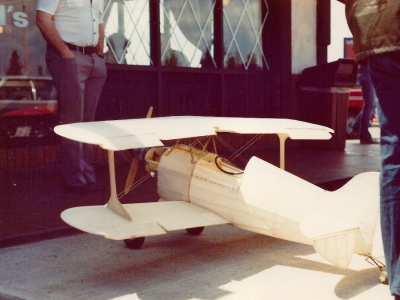 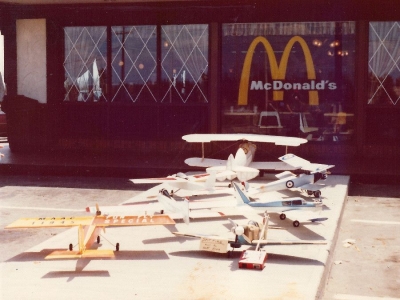